What if I told you before reaching out for Chisa on the wired, Lain was trying to reach out to someone else in her life? Someone close to her that felt so far away because of the disconnection she felt at the beginning of it all? What if I told you the hint to who that is, is in the first line of the opening song to the series ‘Duvet’?

‘And you Don’t Seem to Understand, A shame you seemed an honest man’

Lain feels disconnected to those around her and perhaps it is her own lack of connection with her family, in particularly her father that has caused her to withdraw from it all. If she can’t even form a connection to those close to her then how is she expected to connect and understand those around her.

We see in  the first episode of the series that Lain’s father already has connection to the wired, we see it in his computer set up he has and in the way he speaks of the wired to his daughter about how anyone can make connections and friends through it. He also speaks of how her mother does not understand and even seems to fear the wired, in this moment Lain tells her father she is not afraid. 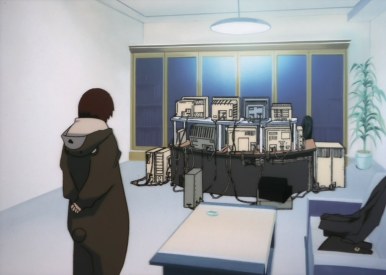 In this one statement of not being afraid, Lain is crying out for her father to pay attention to her, to give her some form of recognition or praise because Lain wants to be daddy’s little girl, something many daughters can sympathize with. But as she tries to gain his attention all we see him do is type away  on his keyboard his eyes transfixed on the screen in front of him in a trance like state.

Lain’s father buys her a new Navi upon her request to upgrade her older one for better access to the wired and like her father Lain quickly becomes obsessed with the wired and upgrading her Navi, but Lain seems to begin to take it to far. Does she keep going to try and earn her father’s attention?

When Lain receives a piece of hardware for her Navi from a stranger one day in her foot locker she immediately goes to her father to find out what it is. This is the first time we seem to see a disapproving look on his face and he tells her he does not know what it is. Lain’s responds to this like a rejection from her father as she wanted to journey deeper into the wired with him as her guide as he had been when he helped her set up her Navi.

In a later episode Lain’s father enters her room after she has made countless upon countless upgrades to his computer, he does not recognize his daughter any more to which Lain responds ‘Don’t worry, I’m still me’ 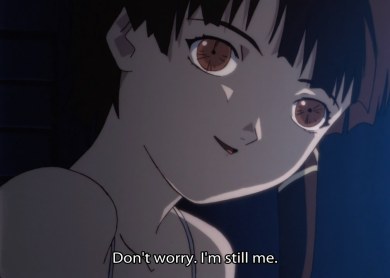 After all is said and done with this series, with all the symbolism and philosophy surrounding it, I can’t help but wonder is Lain a girl that just wants her daddy to notice her?