This is part one of my three-part review of Ai no Kusabi. This first part will cover my introduction to the series through the OVA released in 1992 and 1994 in Japan, the second part will cover the light novel series and the third will cover the 2012 four episode anime OVA. Also Spoiler Warning! These reviews will discuss the plot of the series so if you don’t want to be spoiled, go and watch the anime at least before reading this review. There are ‘places’ online where you can watch the first OVA’s.

The cyberpunk genre has been home to many a masterpiece within anime since the eighties. From the boom in popularity of anime that stemmed from the classic manga and anime movie adaptation Akira to the popularity of shows like Bubblegum Crisis and Appleseed. These stories hold onto a common thread of the early history of cyberpunk stories with a focus on a dystopian future with a story that centers around corruption  of power and the fight for survival in such a world, and this trend would continue with series like Cyber City Oedo 808, an overlooked gem in my opinion that sadly does suffer from a… let’s call it amusing dub which seems to stop a lot of people looking at it seriously, not that it should be taken seriously with how camp the plot can get it is still a really fun anime to watch.

Later cyberpunk titles like Ghost in the Shell and Serial Experiment Lain would add to the genre with a new subject for discussion with the introduction of themes of philosophy, morals, and ethics in the undertone of these still cyberpunk stories and this trend has continued even into the two thousand with series like Texhnolyze and Psycho-Pass, not to say that these themes were not there in earlier titles they just became more prominent in the narrative in the nineties verses the eighties. In between all these classics and re-imaginings of classics such as Bubblegum Crisis Tokyo 2040 and the Appleseed movies, lies a true gem within the yaoi community and a cyberpunk story too often overlooked by fans of the genre because of it’s rooted in the yaoi genre. I am of course talking about Ai no Kusabi.

The first OVA was released to Japan in August of 1992 by Anime International Company and was for many their introduction to the world of planet Amoi, the grand city of Tangura, the slums of Ceres and of course the Blondie known as Iason Mink and the slum mongrel Riki.

The opening to the first episode is the perfect introduction to the ‘lovers’ of this story with it opening with a voice over as Riki wanders the streets. In this voiceover, we hear what Riki has heard time and again in his life. The gossip on how he is not good enough and that he will never be anything but a mongrel. We then see Riki attacked by another gang calling themselves the Elite Guard who corner and attack the mongrel. Just before the final strike is landed however the fight is stopped instantly by the appearance of a Blondie by the name of Iason. (Blondie the term given to the elite class in the society which can be distinguished by their platinum blonde hair) Upon the arrival of the Blondie, the other gang runs off. This, however, angers Riki and we see the fire within him as well as his pride as he tells the Blondie he might not have much but he repays all his debts and then asks the Blondie to follow him and that he is sorry he does not have a car.

It is at this point that we see the first real interaction between the two as Riki repays his debt to Iason with his body but not in the way he had expected, with the whole incident ending with Iason referring to Riki as nothing more than a pet. Master and pet is the relationship between Riki and Iason and though Riki won’t admit it, it is the only way the two can be together because of the world they live in.

Ai no Kusabi explores a world of social boundaries, corruption, societal standards and a world that will just never accept a love like that which is shared with Iason and Riki. Is their more than obsession between the two and can obsession turn into true feelings of love? When love is found what are you willing to give up to protect that love? Will you risk it all for love? These are the questions that plague both Iason and Riki throughout both episodes of this anime and as we the audience watch it play out you can not help but root for the lovers to get their happy ending.

Riki is like a wild beast that has been tamed by the Blondie Iason and longs for his freedom and yet once he has that freedom he comes to the realization that perhaps that is not what he wants anymore in his life, sadly as he is making that decision it is made for him with betrayal within the ranks of the slum, someone has it out for Riki it seems.

Meanwhile, in high society, Iason has become the center of gossip with his mongrel pet that he seems to be obsessed with to the point that those around him worry especially his friend Raoul. Raoul’s worries, however, come to fruition when Iason outright asks him ‘How would you react if I said I loved him?’ His shocked expression at this very moment speaks volumes to the level of social taboo that Iason has broken in speaking those words.

There is a constant space between the two lovers with a world that is trying to tear them apart, Riki is willing to be a pet to be with Iason which in turn disgusts his best friend and former lover Guy. When Riki leaves to be by Iason’s side once again as his ‘Pet’ Guy becomes obsessed with the idea of saving Riki, going as far as to kidnap his friend when he is away from the Blondie but when Riki confronts Guy with the truth he denies Riki’s feelings for Iason to the point of being disgusted by them. In an act of revenge against the Blondie and in his own insane way of one last ditch effort to free his friend from the Blondies grasp, Guy does the unthinkable and mutilates the part of Riki to return a certain item of ownership to the Blondie.

Obsession is an overarching theme of the story between these two episodes and understanding the difference between obsession and love is something both Iason and Riki must come to terms with to move forward pass the past. Guy is a part of Riki’s past and freedom away from Iason, but if he stays a caged pet he can stay by Iason’s side. This is a story that can only end in what I would like to call a happy tragedy. In the end, the lovers get each other despite all those around them not wanting them to have each other and it is in that happy moment of deciding they want to be with each other that they sadly meet their end.

It is however not this ending that draws on me emotionally, it is a scene after this that breaks my heart but to understand why it does there is one more character in this tale you must understand. A servant that has been loyal by Iason’s from the very beginning when Iason first rescued Riki. Someone who worked with Riki to help him keep his sanity while Iason’s pet by giving him another job as well. This character is Katze a former piece of furniture owned by Iason. In this universe, furniture is even lower than pets as they work as servants to the pets of the elite for a price that I will get into with part two of this review as the novels go into greater world building for the series. Throughout the entire anime, we never see any emotion out of Katze, not a smile or frown he remains neutral in the entire series, just smoking a cigarette. Upon returning to his office after the demise of both Riki and Iason we see Katze sit in his chair, open the draw to take out a packet of smokes, grabs a smoke and then drops it from shaking hands as he breaks down in tears. 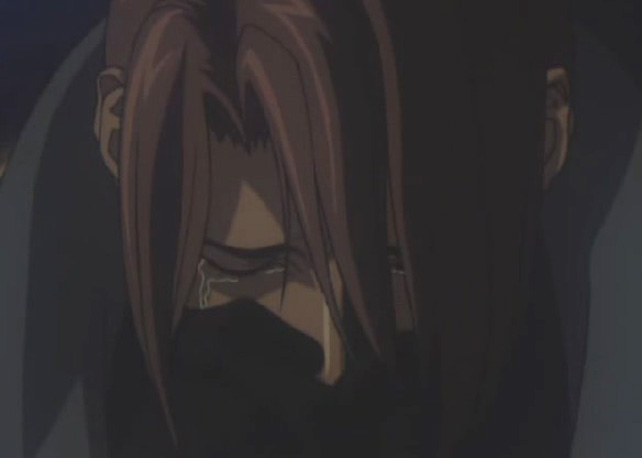 The character with the least emotions shown on the outside breaks down because he is the only one that knows how beautiful the love that was just lost is and that he has just lost the two people closest to him. It was Katze tears that brought tears to my eyes and made me realize just how tragic this tale was.

Wow, I did not realize this review was going to be so long and this is only part one. Thank you for reading part one and I hope you look forward to reading part two once it is online. What was your introduction to the Ai no Kusabi series? Why not tell me down below!