My Life as a Yaoi Fangirl – Dealing with Misconceptions and Hate

Admitting to being a yaoi fangirl in most fandom communities is almost like placing a target on your back at times. Even with the fanbase of yaoi growing every day online, there is still a stigma of the yaoi crazed fangirl who is loud, annoyingly obnoxious when it comes to their favorite pairings that yaoi-ify anything they come across.

Though to a certain extent, I will admit this can be true sometimes, with the way many people talk about yaoi fans online and how they are portrayed when seen in stories one is to believe we act this way twenty-four seven, and this is just not the case. In fact, it borders on insulting some of the things I have heard and read.

For example, Urban Dictionary describes as yaoi fangirl as thus;

Beware of yaoi fangirl groups. If one happens to enter the vicinity of a yaoi fangirl, and one is a relatively cute looking guy, run. Run very far, and very fast. Do not look back. Do not mention certain shows with disdain around them. One will be clawed, or at the very least, never seen from again. Examples of these shows would be, Weiß kreuz, Saiyuki, and Inu Yasha. (Don’t ask me about the last one, I have no idea why either).

If treaded around carefully, one will survive an encounter with a yaoi fangirl with relatively few scars…that are physical. Psychologists should be standing by.

That yaoi fangirl scared the living crap out of me.

I couldn’t hear myself think over the screams of “Seki-san” from those damn yaoi fangirls!

Now I know Urban Dictionary is a crowdsourced online dictionary for slang and is meant for parody purposes and not to be taken seriously, but the sad fact is this statement right here is how many outside the yaoi fandom see a yaoi fangirl when they see one online or meet one at a convention and yet sadly for myself this is not the most insulting of which I have come across, in fact, the most insulting came across in a conversation while drinking with a friend the year before last.

The comments made went along something like this. ‘Oh, I get why women like yaoi now, the bulk of them are either frustrated virgins looking for something to get themselves off or it’s just female penis envy.’ At first, I just shrugged this off as drunk talk because we were both pretty drunk that night and had been watching a lot of weird anime. So the next day I asked him if he remembered what he said the night before and he just smiled about it and went on and on about how he came to that, oh so obvious conclusion and that being a yaoi fangirl I had nothing to be ashamed of if I just admitted he was right. 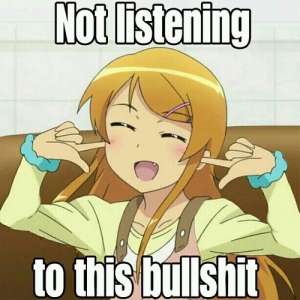 Needless to say, this was the beginning of an ending friendship that went down a very strange and uncomfortable path for myself, that just got to the point where I had to cut that person out of my life completely.

Some of these rumors have even outright ostracized me from my local anime communities (well there is also the fact that I am offline a very blunt person and will call a spade a spade and an asshole an asshole) but at the end of the day it has not stopped me from loving what I love and that is a good yaoi story.

To be an open yaoi fan can be a tough road, because there will always be narrow-minded people out there that will only see you as cancer unto their fandom and as much as you may love to force your views on them, you cannot because that will make you just as bad as the haters out there that will want to tear you down. You have to grow a thick skin, pick your battles and at the end of the day be true to yourself.

I am Mistress of Yaoi, I’m a yaoi fangirl and I love it! If you are a fan say it proud and if you have any questions about being a yaoi fan let me know in the comments below.