Oh, you knew this one was coming after mentioning the title in my The Yaoi Fangirl that fell in love with Bara post! Miscreant Next Door by Hiromi Miyoshi was the first bara title I ever read and it is a story I have loved since, but what is it about this short twenty-five-page manga that made me full for an entire genre? 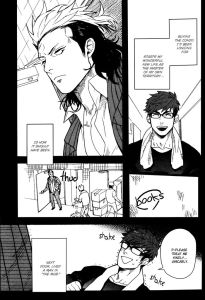 If I’m completely honest it was the main character Yasou that drew me in. (he’s the cutie with the glasses) He causes his own drama when he moves into his new condo upon meeting his neighbor Ichijou. Yasou’s unbelievable level of density to the situation he has put himself and Ichijou in is hilarious and yet sweet.

What follows is an amusing story about wrestling, chest massages and a climactic reveal that leads to an even greater climax than before if you catch my drift. Miscreant Next Door is a manga I introduce to many a yaoi fan who is curious about the genre of Bara but don’t want to completely go into the deep end of burly, hairy men and hardcore sex scenes.

This manga feels like a short yaoi story with just different kind of men in the story to the usual bishies we all love in our yaoi classics and the biggest surprise for me upon my first reading was who was in which position in the bedroom as I was expecting things to be the other way around.

A definite must-read for those curious and easy enough to find online through a google search I cannot recommend this title enough to fellow yaoi fangirls!