If I can I would like to open this post with the number 7 of The Nine Satanic Statements found in the beginning of the Satanic Bible by Anton Szandor Lavey;

“Satan represents man as just another animal, sometimes better, more often times worse than those that walk on all-fours, who, because of his ‘divine spiritual and intellectual development,’ has become the most dangerous animal of all” 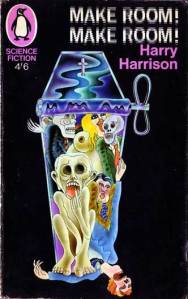 There is a sense of foreboding terror within humans when the very idea that we are not the dominant species we think we are comes up in stories, or even the thought of humans as nothing more than cattle. I first came across this very theme while in my high school years when I first read the novel by Harry Harrison Make Room! Make Room!, though you probably know the story better as the cinematic adaptation Soylent Green. I must say I recommend the book over the movie, but I read the book before I saw the movie so I could be slightly biased. There is a sense of fear and foreboding that can only be expressed through the written word. Inner monologue and an almost psychological breakdown of a characters emotions is harder to get across in a visual medium, where as something like a jump scare just will not work in the written world.

I’m getting a little of subject though, I guess my inner bibliophile just can’t help coming to the surface of thought every now and again, back on the subject of this fear our kind seems to have with not being the dominant species. Living in Australia I see this fear play out on the news at least a few times a year. A tourist will be taken by a salt water croc up north or they will be talking about the latest shark attack victim. The reaction of humans to destroy these creatures because of these attacks and deaths, it reminds me of yet another classic piece of literary. That of course being Moby Dick and the captains obsession with revenge on the whale. You cannot put human morals and emotions on animals especially revenge, and yet here we find ourselves doing just that every time an animal takes a human life – or even looks like they will, the recent history with Harambe is proof of that.

survive is to agree to a sort of symbiotic relationship with Migi.

This is difficult for Shinichi because human instinct wants him to do everything he can to protect not only himself from these monsters but also those around him. There is a very obvious character arc and growth of both Shinichi and Migi throughout the series. 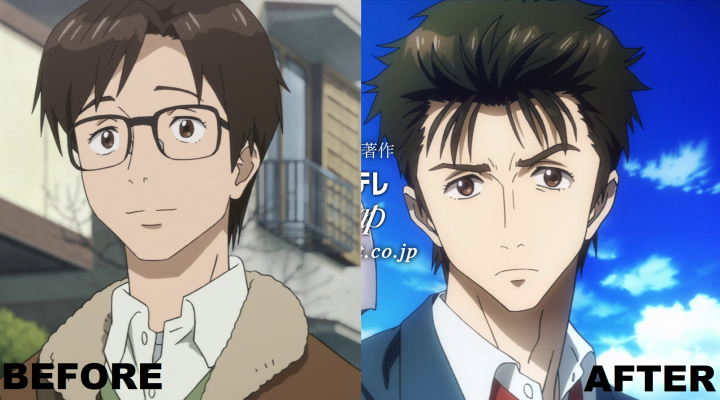 What are first seen as monsters at the beginning of the series, (it’s hard not to think of them as that with the first opening scene of the series) that these monsters are capable of what we call humanity and that humans on their own can be just as destructive monsters.

This is the kind of story I can easily find myself becoming obsessed with and I did while it was airing and I still love it today, except for one thing and warning there are spoilers ahead for the end of the series.

The series ending seemingly came out of left field for me, what started as a horror anime seem to conclude like a nineties after school special on the human impact on the environment…. I went from an interesting gore filled psychological horror, to Captain Planet. I mean in the context of the story it made sense I suppose especially when you look at the final battle scene but still the whole environmental message at the end just almost felt tacked on, up until the final few episodes there was seemingly no hint that this is where the story was headed.

That aside however Parasyte The Maxim is a pretty awesome horror anime.