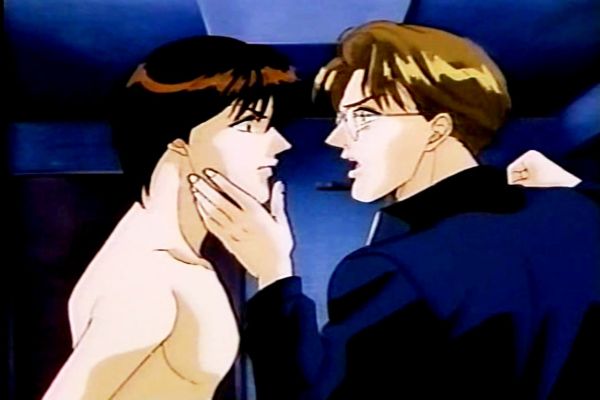 This boys love classic from 1994 can at times be a difficult one to recommend, and I can assure you it is a must watch. This is not because of its subject matter but simply because it is known by two English titles. Some know it as ‘I Shall Never Return’ and others know it as ‘Our Road of no Return’ however, whichever title you know it by it is a classic of the yaoi genre.

Based on the manga of the same name and produced by J.C. Staff (a company that will come up in many boys love reviews I will be posting) it tells the story of the waning friendship between Ken Amufuji and Ritsuro Yoshinari. Both have deep emotions for the other but whereas Ken tries to confess his emotions to Ritsu without seeming to take the situation to seriously, Ritsu, in turn, does not know where his emotions towards Ken lie, he values him as a friend but does not know quite yet if his emotions are there.

Things quickly go downhill for the two however when Ritsu gets a girlfriend, Moeko but she is not completely loyal to Ritsu and spends an evening with his best friend. What follows is a flurry of confused emotions on all sides and all parties involved just wanted to know if their feelings will ever be validated. 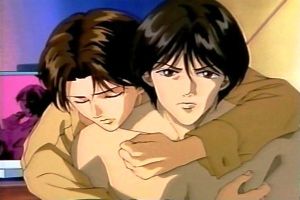 The story quickly becomes a sort of love triangle with both Ken and Moeko wanting Ritsu to just treat them like the lover they want to be, this being a boys love anime should give you the hint as to who Ritsu chooses in the end.

Throughout this one episode anime, we get to see the personal journey’s of our two male leads as well as the effects their own actions have on those around them and this makes for a very fascinating a realistic story. Too often in romance and yaoi anime, the focus is very heavy on the main characters that we don’t often see the reaction of those around them. This makes Moeko inclusion to the story an interesting addition to the story and not an annoyance which a lot of female rivals can become in boys love stories. 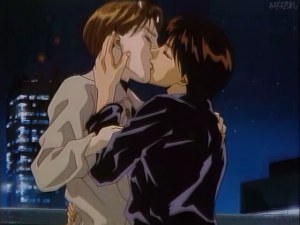 If I had one complaint about the anime, it is sadly the ending. In the last few minutes of the anime, there is a set up for a completely new conflict that goes nowhere. This is a common problem with a lot of anime from the nineties with the whole ‘go read the manga for more ending’. (See the original Berserk anime as a perfect example) I get it though, the anime is a sort of advertisement for the manga but it should be able to stand on its own story-wise in its own medium with a conclusive beginning, middle, and end.

Overlooking this odd place to end the story, however, the story that is here is worth the time of any fujoshi looking for something from the past to see and experience and old world anew.