Killing Stalking Season 2 Review or So You Thought the First Season was Dark?

Throughout my first review of the manhwa I wrote about what about this story draws us in and the importance of stories like this being a part of the modern fiction. This is because they open dialogue for these issues in real life. After everything that happened in the second season, I still stand by this. The dark themes continued throughout the second season that was for sure. With an ending that was a perfect climax to the story of the second season, it left me wondering how I was going to tackle the dark rabbit hole that is Killing Stalking once again.

Season two starts off where season one left off with the aftermath of Yoon Bum’s second kill, at the amusement of Sangwoo. But the outcome of this act is not what Sangwoo wanted he realizes when he asks Yoon Bum how he feels as the young man is freaking out. His response is he feels nothing and this is where the story of the second season begins with a feeling of nothingness and then anger from Sangwoo. Anger that his capture does not feel the same thrill as him in what he loves, he wanted to share something he loves with Yoon Bum and Bum’s rejection of enjoyment at this moment is not what Sangwoo wanted. In a way, this rejection of action feels like a rejection of everything Sangwoo feels he has done to ‘help’ Bum. In anger he throws the same rejection at Bum to the point of trying to throw away Bum, to set the man free. Something that Bum had once wanted but now fears. It is a classic case of Stockholm Syndrome, for as fucked up as this life with Sangwoo is in Bum’s mind that’s not what matters. What matters is that he has a life with Sangwoo, something he has wanted and now has and does not want to let go of and later in the season Sangwoo takes full advantage of this fact to save his own ass.

What follows is a road trip and hike from hell that involves the disposing of the dead body of the girl. Though it seems around Bum Sangwoo is beginning to lower his guard as he slowly reveals more memories of his past, from eating apples with his mother to well I won’t spoil the surprise that Bum accidentally steps on. It is this mix of cruelty and kindness from Sangwoo that makes his character feel like a real abuser. When someone thinks of an abusive relationship one might think of someone who constantly mentally and physically beats a person down. Making them feel nothing more than worthless and though this is part of the cycle of abuse it is not all of it and if anything sometimes it, not even the cruelest part.

How familiar does the following scenario sound? They said they were sorry and that it will never happen again, but then it happens again and again and again. Every time the abuser apologizes they go back because they love them because you don’t see how kind they really are and that it is the victims’ fault because they upset the abuser. If I don’t get them mad then they won’t hurt me anymore. You are left wondering why they keep going back. It’s a cruel cycle of beating a person down so much that they think they don’t have anyone but the abuser and the victim thinking that those moments of kindness are signs of love from their abuser. They are not signs of love however, they are just a crueler form of abuse and emotional manipulation. Oh Sangwoo is a master manipulator that has his whole world fooled and Yoon Bum came from a world of his own where he had no self-worth, to begin with, he really did not stand a chance when it came to Sangwoo.

But Sangwoo has not got everyone fooled, there is a dog sniffing out his trail and he is getting dangerously close to revealing the truth. One thing that has been made clear from the beginning of Killing Stalking is how inept and possibly either corrupt or just lazy the police are. But there is someone amongst the police force that does not trust Oh Sangwoo and on instinct alone, he just seems to know there is something up. Throughout the beginning of the season, 2 and even confronts Sangwoo in an attempt to save Yoon Bum who he is sure is a victim of something. Will this renegade police officer outsmart Sangwoo? Well, you will have to read the second season to know because it is an amusing game of cat and mouse not worth spoiling to anyone who has not read the latest chapters.

As well as covering what I have already written about within the latest season of Killing Stalking other interesting turns have been finding out more about both Sangwoo and Yoon Bum’s past, Yoon Bum’s, in particular, was extremely hard to sit through and read for even me, it is a chapter that came with a warning for its content. It talked about being raped and abused by a family member as well as self-harm. I said it before this is not a story for everyone, as not everyone can read about stories like this and be ok with it.

The climax to the season was also another uncomfortable moment, in short, it is a rape scene between Sangwoo and Yoon Bum. Rape kind of bookends the season because there was a similar incident in the first chapter. The only difference is that the first scene involved and ‘item’ being used to abuse Bum and in the final scene well it is almost as if Sangwoo is finally claiming Bum as his own by doing the deed himself. It is a sickening act that is the culmination of everything that happens throughout the second season. I don’t know how Koogi is going to outdo the second season in the upcoming third season but you can bet that myself and many other fans are at a point with this story now where we are just in to deep to the madness that is Killing Stalking and won’t be looking back any time soon. 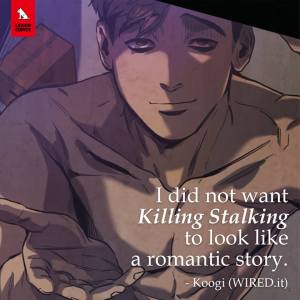 Before I end this review I want to share something cool with all the other Killing Stalking fans out there. A couple of months ago Koogi did an interview but sadly the interview was in Italian, I have however found a translation of this interview over on Tumblr here in English. It is a rare interview with the creator and a fascinating read for fans.

I hope you the readers have enjoyed the first review for Lezhin Month here on Yaoi Playground and Mistress of Yaoi is curious, do you have a favorite BL comic on Lezhin?

One Reply to “Killing Stalking Season 2 Review or So You Thought the First Season was Dark?”