Papa to Kiss in the Dark – Boys Love Classic Review

Released in 2005 and based on the light novel by Ken Nanbara, this is one boys love classic I must admit I have been putting off reviewing because I was not sure how to tackle it exactly. It is an anime that delves into some questionable themes and with those themes being shown for comedic effect I seriously had to think about this one. Then I came to the realization that well it’s a story that though full of dramatic elements is not meant to be taken too seriously, which is made obvious by its comedic tone, though this will not be a boys love anime for everyone there is no denying the impact this OVA had on the genre and the fandom.

The anime tells the story of freshman high school student Mira, who just so happens to be in love with his father who is the famous heartthrob actor Kyousuke Munakata and Mira’s love for his father is not one-sided for Kyousuke also loves Mira very much as well. Though it is not confirmed in the anime for how long it becomes very obvious in the first scene of the anime that they have a very intimate relationship. If this kind of story makes you feel uncomfortable then I do not recommend this anime. The relationship between Mira and his father is made to be very adorable with Mira fantasizing about his papa and the two constantly teasing each other when alone. 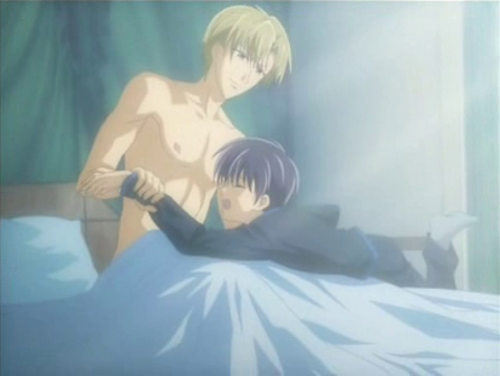 One might be left wondering though how do those around Mira and Kyousuke react to there relationship? Well Mira’s friends seem very aware of what is going on to a certain level with Mira saying when he was just a small child that he wanted to grow up and be a bride for his papa. It did seem a bit odd that the media had not picked up on the unusual relationship between Kyousuke and his son but this could be because they are distracted by the beautiful actress who is spending a lot of time with Kyousuke out of the house who seems to have a secret connection to both Kyousuke and Mira.

Drama from the story comes when Mira begins to question his own feelings for  Kyousuke and Kyousuke’s feelings for him, though this drama is resolved surprisingly quick and the OVA does have a sort of happy ending. One scene in particular that stood out to me when I first watched the anime was the ‘milk’ scene. See before watching this OVA I did not know that milk was a term sometimes used for sperm, it makes me giggle now much like the ‘corn’ scene from My Sexual Harassment .

Though this is one boys love anime that won’t be for everyone, whether it is the age difference between the two main characters or the incest element if you can look past those issues you will find an amusing and at times heartwarming OVA that I will confess is a guilty pleasure for this fujoshi. Do you have an anime within your favorite genre that you consider a guilty pleasure? Let me know below because I have more than one guilty please anime and a guilty pleasure is nothing to be ashamed of.